Tom made spaghetti recently with wonderful homemade meatballs.  It was simply divine.  Boiling spaghetti is always mysterious though.  No matter how much we measure out to cook, we always think we’re not making enough and then end up boiling the whole darn box of noodles and end up with enough spaghetti noodles to feed a small third world country.  Suffice it to say, we did the same thing this time and had a big strainer full of cooked spaghetti noodles and had polished off the sauce and meatballs.  Tom packed up the noodles with some water to keep them moist and stuck them in the fridge for the chickens.

And to think, at one point he said he didn’t even want chickens.

So, one night when I came home from work, I changed my clothes and grabbed the container of pasta and headed out to my favorite place, Vinnie’s Chickentown (that’s what he likes to call it).  It was time for a pasta party.

The usual mayhem ensued when they spotted me carrying a bowl.  They may be simple chickens, but they quickly picked up that people don’t carry bowls around the backyard unless it has something to do with them.  I stood by the run for a moment and let them do their excited dance that they do when there is ANY possibility of a special treat.  Vinnie was beside himself.  For a rooster who should be very regal and intimidating, he can make an absolute idiot out of himself when he does the “GIMME GIMME GIMME” dance.  Cluck (who has now gained the nickname of “Cluckenstein” or “Cluckzilla” because he’s gotten so LARGE), watched suspiciously from the other side of the run.  He’s always convinced something bad is going to happen.  He was trying to look like he wasn’t watching me, but I knew he was.  He tries to pull off the regal rooster thing too, but doesn’t do so well with the intimidating part because he always looks like he’s about to panic and pass out.

I finally fished out a piece of pasta and held it down where Opal, Oprah, and Jessie were standing so that one of them could grab it.  Like a bolt of lightning, Vinnie’s head shot through the fence, grabbed the noodle and he turned and ran as fast as his school bus yellow feet could carry him…with eight pullets in hot pursuit and Cluck panicked and ran into the fence.  Vinnie sucked down the noodle and strutted away, obviously very pleased with himself.

The girls had returned to the side of the fence and this time I held out a few noodles for them to grab.  Vinnie was still feeling cocky (see what I did there?) from conquering the first noodle and was down by the dusting bath (we call it The Dust Bowl).  As I held the noodles out, Opal stretched her neck and opened her beak to grab one and ZING!  Vinnie’s head shot into the space and grabbed the noodle and he ran like his tail feathers were on fire.  The girls didn’t follow this time but waited at the fence like they were thinking “QUICK!  While he sucks that one down, give us a few!”

I pulled out a handful of noodles and dropped it into the run.  The girls clucked excitedly and then ZOOM….Vinnie ran through, grabbed a beakfull (<—that word is NOT in the spellchecker) of noodles and took off for The Dust Bowl again.  He set the noodles down and looked back and noticed that the others were still feasting on noodles that I’d added to the pile.

He was absolutely panicked.  He left his noodles and ran back to the pile as the girls were finishing off the last noodle.  He stuck his head through the fence and made a panicked low clucking noise.  In the meantime, one of the girls had toodled on down to The Dust Bowl and was happily snarfing down his noodles.

I threw another pile into the run which was attacked with a ferocity that was slightly disturbing.  I had obviously incited some sort of Chicken Noodle Riot.  In the periphery of my vision, I caught sight of something reddish-brown.  Cluck had sidled over to the group and was eyeballing the noodles with interest.  He’s been a bit better about joining the group for snacks.  He took a step closer and since the pile of noodles was dwindling (read as..Vinnie was scooping them up like he’d never eaten before), I decided to throw Cluckzilla his very own pile of noodles. 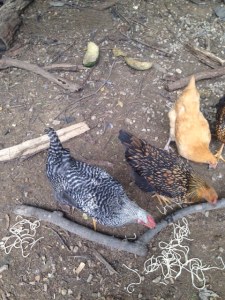 Cluck made some sort of ungodly chicken noise and hightailed it for the coop.  Vinnie seized the opportunity of a fresh pile of noodles and shot over to Cluck’s noodle pile.  I dropped another pile where the girls were feasting.   Vinnie ran back to that pile with a noodle still dangling from his beak.  Oprah grabbed for it and he ran to a corner to slurp it down where he wouldn’t be bothered by the others and then ran back to Cluck’s pile and then to the girls’ pile, grabbing a fresh beakfull of noodles from both places.   Cluck had come back to the run and so I threw another pile that would be closer to him.  Of course he freaked out again and ran.  He’s so brave.  It was a handful of noodles.  You’d have thought I was throwing bombs at him.

Vinnie was completely out of his mind at this point.  He had a beakfull of noodles, he was trying to pick up more noodles, noodles were falling out of his beak and he was grabbing them so fast that he was putting too much pressure on the fragile noodles and simply biting them in half and ending up with practically nothing.  Just to make it interesting, I threw out a few more small piles (none of the piles were very big).

Vinnie frantically ran from pile to pile and while the girls stayed put at different piles happily eating pasta.  I had thrown one pile fairly far into the run and I watched as Cluck timidly made his way to the pile.  He put down his head and looked closely at the noodles and took a nibble…then a bigger nibble.  He decided they were safe and tasty and was soon earnestly slurping up noodles.  Vinnie ran up, having just noticed that Cluck had a pile to himself,f and in a brave rooster move Cluck raised his hackles and charged Vinnie…who turned and ran for his life like the subordinate albeit pasta-loving rooster that he is.

Look how brave Cluckzilla is!

Soon the noodles were gone and the group reconvened at The Dust Bowl to preen while they digested crops full of noodly goodness.  Vinnie inspected every square inch of the pasta party area and vacuumed up every little bit he could find and then came over and looked at me and made one of his odd little noises.  I held the empty bowl down at his level and he poked his head through the fence and looked at it with one eye and then the other eye.  He made a few more noises, which I’m sure were probably chicken swear words, and then he turned and wandered down to the group to join the preening party…of course stopping every little bit to inspect the ground for bits of noodle.

I find myself smiling constantly when I’m around the flock.  Their weird personalities, Vinnie’s obsession with snacks, even the challenge of getting Cluck to relax just makes me happy, content and peaceful.  If you’d have told me last year that left over spaghetti and ten chickens would be the highlight of my day, I’d have laughed out loud.

I just love those little Noodlefaces to pieces.

The other day, I was “fixing” strawberries (that’s what my aunts used to say) and I collected all of the over ripe berries and berry tops in a plastic container as I worked.  When I was finished, I nearly threw the whole thing away and then it dawned on me that I had a whole herd of perpetually hungry chickens outside.  The only problem was that they’d already eaten half a watermelon that day.  I didn’t want to cause any chicken intestinal issues, so I thought about saving them and then an even better idea struck…I’d just add some water to the plastic container and make a big strawberry popsicle for them!

I can’t think of anything better on a hot day, than a popsicle.  Even if you’re a chicken.

Recently, I’d read a comment that someone made online that chickens don’t need that type of thing.  Basically, the person was putting down the whole idea of doing nice things for your chickens because they’re chickens.   I remember feeling a little sad because I wanted to do the right things for them and this person seemed to indicate that frozen treats were a silly idea.  How sad.  How really, really sad.

So, because I like to be contrary, I froze that strawberry treat to save for a hot day…which turned out to be today.  I’d had a rough day and I couldn’t wait to go out to visit the birds.  When I arrived home, I changed clothes and grabbed my silly strawberry frozen treat and skittered right out to the coop where I was met by the chickens with their usual greeting of running and clucking.  I actually feel physical comfort when I look at them.  I can’t even tell you what they do for me mentally…it’s good though…I swear.

I threw the frozen strawberry block into the run and scared them all half to death.  If there hadn’t been fence at the end of the run, Cluck would still be running. He’s not a very brave rooster.  Anyway, they all came around to check out the block and pretty soon they were pecking and licking (do chickens have tongues?), well, they were enjoying it…and that was the whole point of doing it.

Although chickens may not need coop decorations or fancy nest boxes or specially prepared food that’s healthy for them, it certainly does no harm.  If they are MY chickens and I’m willing to put up with the ramifications of what I’ve decided to do…like washing nest box curtains, cleaning decor, or making special treats as a part of their regular diet…then I don’t think it’s a bad thing.  Everyone gets to choose how they keep their chickens.

I choose to keep mine happy….because it makes me happy.