I was a SLUG this weekend.  We did go to a local farmer’s market and I baked bread and failed miserably at making a new cake recipe because I forgot to put the FOUR eggs in.  The moral of that story is “Don’t Drink Wine While You Bake”…or something like that.

The chickens kept me fairly busy (read as: I spent a lot of time sitting in a chair and watching them).   Vinnie and Cluck have determined that  standing next to each other and taking turns crowing is a lot of roostery fun.  They also started rooster dancing this weekend.  When Cluck did his dance the first time, I thought he was having a stroke.  He sidled up to Opal, did the funny little kicky thing with his foot, dropped his wing a little bit and waited a moment (she was totally ignoring him) and then he grabbed the back of her neck and tried to…you know…get to “BIZNESS”.  Opal screeched like her head was being torn off and once Cluck let go, Opal spun around and went after him.  She was LIVID.  Cluck stood there, totally taken aback by her attack and then took off for the other end of the run so that she’d leave him alone.  Opal is that girl who gets hit on at a bar and throws a drink in the guy’s face.

Vinnie doesn’t have the rooster dance down quite yet.  He just started really dancing up a storm this morning and it is the most awkward, uncoordinated thing I’ve ever witnessed.  He doesn’t look sexy, he looks like he needs to be medicated.  He doesn’t seem to know which foot to kick during the whole dance segment, so he just kicks them both, sometimes simultaneously and other times one foot will just kick up a storm.  It’s not so much “Rooster Dance” as it is “River Dance”. 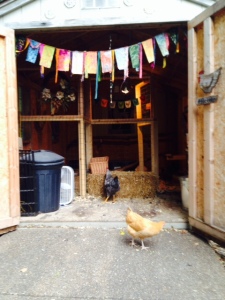 The Lawn Sharks emerging from their lair.

We worked on free ranging some more this weekend. I took the advice of a chicken friend (a friend who likes chickens…not a friend who IS a chicken) and I just opened the door to the chicken pen inside the coop, dragged my chair outside and sat and waited.  I waited and waited and the chickens all sat in the run and stared at me while they griped about not getting hackberry leaves or scratch.  I let them gripe.  I told Vinnie “You don’t always get what you want.  I do, but you DON’T”.  He needs to remember that.  I finally went back into the coop and threw some scratch on the floor of the open doorway of the pen.  All ten of them came running into the coop the moment they heard it hit the floor.  I walked back outside and waited while they talked it over in the coop.  I sat down in my chair with the container of scratch and shook it every once in a while.  I looked up and Opal was walking out of the coop and came over to where I sat with the scratch and started eating weeds and scratching for bugs.

The other chickens had a meltdown.  I walked back into the coop and they followed, running along the side of the run and into the coop.  I shook the box and walked back and forth through the open door.  Opal was still out side foraging for goodies.  I dropped some scratch in the work area and went to sit back outside.  I looked up again…VINNIE had figured out how to get through the open door.  He joined Opal in the grass, but the rest of the crew had stampeded out into the run and were besides themselves because Vinnie and Opal were sucking down grass.  I tried one more time to show them the open door and finally gave up.  I’m just going to keep doing the same thing every night and hope that I can teach more of them that walking through the open door is not walking into the jaws of a Sasquatch.  They’ll eventually get it…I think.  I hope.

At the end of the free ranging session, I caught Vinnie (chickens really  make you get that cardio exercise) and deposited him into the coop and then I went out and got Opal and brought her in to the pen.  I wasn’t really watching what was going on, but I heard chicken feet stomping up the ramp into the coop as I set her down and then there was  flash of black and white and Vinnie was standing on the roost bar next to me telling me how ticked off he was that I had touched one of his women.

This has got to stop.  I stood there calmly while he regarded me from the roost bar.  He appeared to be challenging me.  So, still being very calm, I pointed my finger at him and yelled (probably too loudly) “KNOCK IT OFF YOU MORON”.   Vinnie smoothed his feathers, shook and then smoothed his feathers again and jumped off the roost bar and ran  out of the coop.  I went out to the run where he was standing around complaining in chicken talk and randomly jumping on girls who would scream and run for their lives.   He came up to the fence, chortling and whistling and I explained to him that if he doesn’t change his attitude, I’m going to cut off his feet and stick them in his ears.  He clucked amiably and went to inspect an empty bowl in the run.

I made the chickens a tasty treat yesterday too.  I had some leftover pureed pumpkin from the cake disaster, so I put it in a bowl and added some plain yogurt and sprinkled it with scratch.  I’d been told that yogurt is a favorite of chickens and I had no idea about the pumpkin, but I knew it wouldn’t hurt them and the scratch sprinkles were just a way to get them to try the pumpkin and yogurt.  Since they’ll eat the bumper of a car if I put scratch on it, I figured the odds were pretty good that this would work too.

They slurped down pumpkin and yogurt like it was their job.  I expected it to be a lot more messy than it was because I’d heard how they shake their heads to get it off their combs and face.  I didn’t really notice them doing that, but Vinnie, with his considerably large, hangy-down wattles was covered in pumpkin and yogurt.  I swear he needed a bath afterwards.  It turned out that I didn’t have to give him one, because the girls all carefully cleaned it off his face and wattles.  He stood very still with his head lowered while they fastidiously cleaned all of the goop off.  He closed his eyes while they cleaned up his face and wattles like it was either pure heaven or he just didn’t want them to poke him in the eyes with their pointy beaks.  They were very careful…and looked almost gentle as they removed every last speck of pumpkin and yogurt. 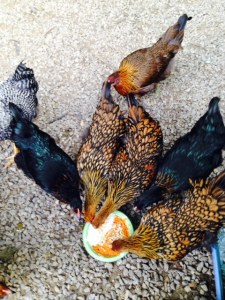 Just when I think they’re uncivilized hooligans, they do something sweet like cleaning off Vinnie’s face and he behaves like a gentleman while they do it.  Of course, I guess they could have been tasting him to kill him and eat him later.