Sometimes, the chickens do things that make me sad.  Don’t get me wrong, I love them to bits.   The situation with Roseanna has not gotten any better though.  I have to agree with them, she’s a complete weirdo.  She just has no manners.  She steps on other flock members, knocks them over when she comes rampaging through the group and is just generally….well…WEIRD.

The flock has just had it with her.  They peck her when she tries to join them.  She hasn’t been injured yet, but I’m going to have to figure out what to do with this situation.  At this point, she’s become an outcast and spends most of her time by herself, which she doesn’t seem to mind.  Last night, everyone was in The Dust Bowl preening and she sat alone in a pile of twigs just watching.   It broke my heart a little bit.

It’s ridiculously hot here today….AGAIN.  I’d planned on going to a local farmers market but one of my spies on the scene contacted me and said that it’s packed and it’s HOT.  I’m not good in public on a nice day.  I just don’t like crowds. So, I think we’ll make the trip to another AIR-CONDITIONED market that a local orchard runs.  It’s actually a store…which is better for me and no one will get stabbed if they get in my way because I won’t be hot and sweaty.  I’m only thinking of people’s safety.

The flock has been a bit cranky too.  Cluck has been stalking Vinnie and I’m not sure why other than Vinnie is another boy.   Last night, Vinnie was minding his own goofy business when all of a sudden Cluck freaked out and threatened him with the whole ruffled hackle feathers routine.  Vinnie responded by ruffling his hackle feathers for a split second and then ran like a scared little girl.  Cluck took off after him and Vinnie ran faster and so did Cluck.  Pretty soon, Vinnie ran over to the fence where I was sitting on my chair and looked at me frantically.  Cluck glided up behind him and by this time Vinnie had made himself very tall and skinny and looked as though he might just pass out right there.  I got very close to the fence…just out of Cluck’s pecking distance and whispered..”Cluck, honey” and then yelled “KNOCK IT OFF”…and Cluck blinked at me a few times and turned and walked away.  Vinnie was still all tall and skinny and I tried to calm him down by stroking his chest feathers and finally he stopped his frantic clucking and got back to his  previous business of just chickening around.

AND, one of the Wyandotte sisters has become obsessed with the other chickens’ feathers.  If she sees a feather out-of-place on one of the other birds, she feels that it’s her important responsibility to remove the out-of-place feather.  She thinks she’s the aesthetician of the flock.  I think she’s a budding feather picker and she better stop it or I’m going to put her beak on the back of her head.  She and I have talked and she’s considering her options. 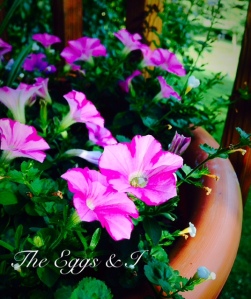 In other news, the plants on the deck are doing wonderfully!  I don’t want to talk about the garden.  Really.  Topic is completely off-limits.  I’m pretty sure that those tomatoes from the farm market we go to will be DELICIOUS.