So, the southern Indiana heat continues and just for fun, it’s mixed with about 500 percent humidity.  If you go outside and just stand still, you will need a towel to dry off in about a minute and a half.  If you have hair, just figure it’s not going to do what you want it to, so you might as well wear a hat, put it in a pony tail or shellac it to your head…which is what I did this morning with about half a can of AIR TIGHT hairspray.

The chickens are OVER it.  Last night, when I went to the coop after work, they were all standing around panting, which is what chickens do when they’re hot because they can’t sweat.  We provided them with as much “coolness” as we could yesterday by placing frozen water bottles around their environment, feeding cold and frozen treats and I even made them a little wading pool out of a cat litter pan and threw a bottle of frozen water in that.  A few came over to check out the wading pool with the frozen water bottle in it, but since it was a new thing, they didn’t happily jump in to cool their scaly toes, but sort of just walked around it and clucked to themselves.   I tried to coax Vinnie into the wading pool since he’s usually the first one to try new things, but…you know, it’s VINNIE we’re talking about here and the best that I was able to get him to do was to perch on the side of the pan and drink out of it like one of those birds from the seventies. 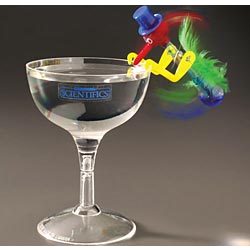 I went out to the coop several times to check on them last night, trying to figure out other ways that I could help them to cool off.  They seem to like lying next to the coop building where the air comes out from underneath the coop.  That’s Cluck’s favorite hang out and on hot days, he’s usually hanging out there (panting) with a couple of his ladies (also panting).

During another chicken check, I found several of them lying in the dust bath.  I think Vinnie had been partially buried in sand and dirt because when he heard me on the path, he popped up very quickly like he was mounted on some sort of springs and a giant cloud of sand and dirt exploded into the air.  He came skittering over to the side of the run looking for treats (even though they’d just devoured a quarter of a cold melon) and he stood there panting. Poor guy!

I spent most of the evening (in between chicken temperature checks) trying to figure out what else I could do to try to cool them off.  This by far is not the hottest it gets here.  This is just JUNE.  It gets ridiculous in the middle of summer.  Sometimes we don’t even use our pool because the water is so warm that it’s not even refreshing.  It’s just DUMB that it gets that hot down here.  We wait all winter for the spring and summer to arrive and then when it does, you’re afraid to step foot out the door without an asbestos suit.

I’ve also got to find a way to have one of the coop doors open at night and I’ve been ranting to Tom about building this massive screen door thing out of wood and hardware cloth.  There are windows in the coop and a fan, but once I close those big main doors, although the fan moves air from the outside through the window, it still gets mighty toasty in there.

This morning when I opened the doors of the coop, I half expected to see golden brown rotisserie chickens on the roosts.  Worrying about the heat and humidity kept me up fairly late last night, but I was up and out to the coop early to spray down the run and refill the watering stations.  I also threw a couple of handfuls hackberry leaves into the wading pool to hopefully entice them to get in to get the leaves out because they are their FAVORITE thing to eat these days.  Vinnie saw me picking leaves and was just out of his mind with excitement.  He purred and rumbled and clucked while I finished picking leaves and then I walked over and tossed them into the wading pool.  He ran over and looked at the leaves in the water and tried to catch one and got a beak full of water instead.  He clucked several times and tried again…same thing…beak full of water.  He was joined by several others and they all tried catching floating hackberry leaves with varying degrees of success.  Most of them just ended up taking drinks of water as the hackberry leaves floated out of their reach.  Tom called a bit ago and said that some of them must have gotten into the wading pan because most of the hackberry leaves were gone and the gravel all around the pan was wet from splashing.

YES!!!  Now, if I can keep them from drowning themselves I’ll be in good shape.

So, Tom is out shopping for various cooling devices as I type this…misters, outdoor big fans, etc.  I told him that if it gets too hot, I’m herding the whole mess of them into the air-conditioned three car garage that he uses as his shop.  They can be his “helpers”!  I’m pretty sure the thought of 10 sweaty chickens hanging out in his shop and perching on his table saw is what sent him shopping first thing this morning.  He’ll fix it up so that they have the coolest coop and run in Indiana.

There’s a method to my madness (wink).